Newspapers haven’t always had armies of journalists on the hunt for interesting stories to publish.  Prior to the last few decades, many newspapers filled their columns and enticed their readers with stories taken from other newspapers.  This particular habit is very helpful when you’re researching areas where the local paper is no longer available, but it sometimes amounts to another round of the old game of telephone.  You know, where one person whispers a secret to the person next to them and that person tells the next and so on until the last person reveals the version of the story that they heard.  Inevitably, details get lost and the message gets changed.

On 9 August 1920, the Alexandria Gazette published a short blurb about the explosion of a sawmill boiler that occurred near the town of Houston (now the Town of Halifax) in Halifax County.  I found this article while searching for mention of the death of my great-grandfather, Beverly Oscar Burton, in 1920.  According to the family story, he died in a boiler explosion so powerful that people could feel it in town, four miles away.  His death certificate confirmed that he died on 30 July 1920 in Halifax County due to a sawmill boiler explosion.(1)  The only problem?   According to the paper, two men died in the explosion and neither of them was Beverly Burton. 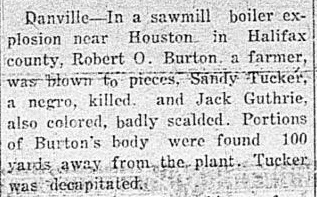 The article in this case, printed in Alexandria based on information from Danville about an incident that occurred in Halifax, named the two men killed in the explosion as Robert O. Burton and Sandy Tucker.  My family story mentioned that someone else had died, but without any names.  A death certificate confirmed that Sandy Tucker, Jr., a seventeen year old ‘colored’ boy, died in a boiler explosion on 30 July 1920,(2) the same date and cause as found for Beverly Burton.  The death certificate also named Sandy’s employer as B. Burton.  But no death certificate was found for any Robert Burton for that year.(3)

So how did the Alexandria Gazette end up printing that Robert O. Burton died in the explosion instead of Beverly O. Burton?  Probably the same way information changes in the telephone game, where the loss of one tiny detail at each telling creates a large change at the end.  For example, say a local newspaper reported that Beverly Oscar Burton died in an explosion.  Someone from a nearby city paper reads the article and wants to re-print it, but chooses to save space by using only the man’s initials, B.O. Burton.  On the other side of the state, a newspaperman reads about a grisly explosion and decides to share, but maybe he reads the name as BOB Burton.  He knows that ‘Bob’ is a common nickname for ‘Robert’ and may have heard of Robert Oswald Burton of Halifax, a well-known preacher, or his son by the same name who was a well-known lawyer, so he decides to honor the decedent by printing his full name instead of a nickname.  Just that easily, Beverly Oscar Burton is lost and Robert O. Burton takes his place.  His family back in Halifax probably never even knew about it.

If I had been searching only for ‘Beverly Burton,’ I’d have missed this article.  If the details hadn’t been so unusual and so remarkably close to my family story, I might not have even taken a second look.  By following up on unique details, I found my answer.

This entry was posted in Uncategorized. Bookmark the permalink.